Rules of the Road: Driving in Mexico

We drove the entirety of the Mexico 200, which is this country's equivalent of the Pacific Coast Highway. We know more now about driving in Mexico than when we began 3 weeks ago.

*The rules are pretty simple: There are no rules. You can drive whatever direction, at whatever speed, and you are responsible for not hitting anyone. We have seen cars careen in reverse down one way, one lane streets-- and successfully insist that other drivers back up to get out of their way. When on an entrance ramp to the highway, we met another vehicle driving up the entrance ramp straight at us. We drove around each other. 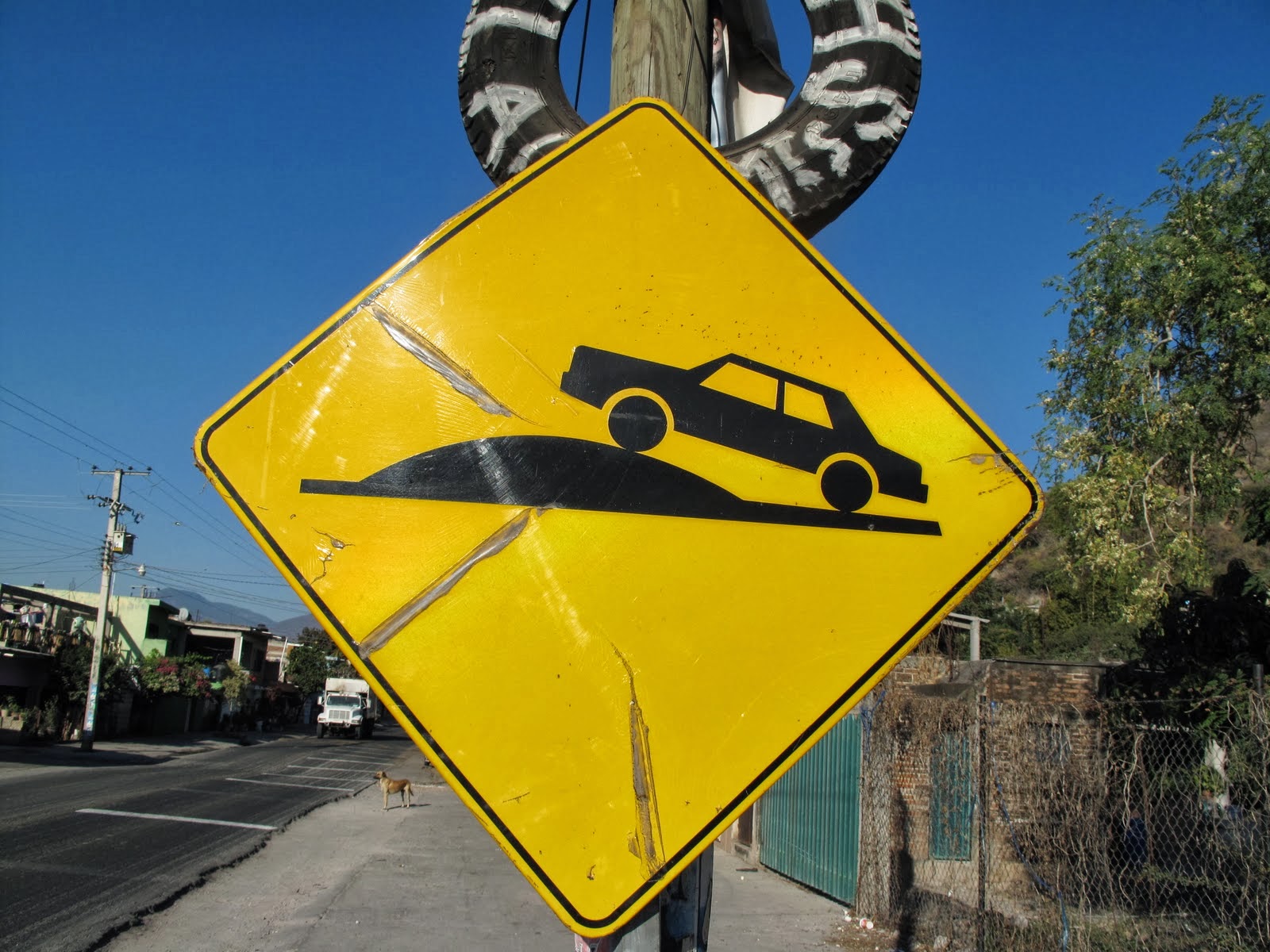 *TOPES (toe-pays, or speed bumps) are the one consistency. They are varying in size and shape, but sometimes the size of Volkswagons.  Since speed limits either don't exist or aren't enforced, instead you will find Topes anywhere that you are expected to slow down-- towns, schools, fruit stands that would like you to look at their wares, etc. You may be going 100kph and the tope will have no warning sign.  We have learned to look very closely for anything resembling a speed bump-- extreme caution is exercised where shadows masquerading as topes cross the road.
Most roads have no shoulder, so going a reasonable speed is advisable, and the topes definitely guarantee this. However, some stretches of road have been vastly improved-- 4 lanes of median-divided traffic, wide shoulders and guardrails, pedestrian bridges-- you really could go fast quite comfortably. For some reason, there roads have even MORE topes. Why not just keep the road small and dangerous if we all have to go slow anyway?

*Anything, or any number of people, are eligible for rides in the back of a vehicle. Four persons is the record we have seen on a motorcycle-- with one helmet total. Small pick up trucks can transport up to 20 people, horses, cows, or anything else for that matter.

*The nicest roads are toll roads, or "Cuota."  Well in advance of the toll booth, a sign will tell you to prepare your toll. This sign, nor any of the subsequent signs between there and the toll booth, will give you any clue as to what the toll might be. They are random amounts between 15 and 63 pesos. The toll booth attendant will act as put out as possible when your toll is not prepared.

*Cops: there are more police in this country than I have ever seen anywhere. The all carry semi-automatic weapons, even when riding in the back of pickup trucks.  They do not enforce speed limits or care if you run red lights. We have been pulled over once, in Zihuatenejo at night, for having a tail light out. All our taillights were in full operation. This cop clearly spotted a gringo-mobile and wanted a bribe. Luckily, we had a Mexican friend riding in the backseat who rolled down the back window as the cop approached the vehicle. Like Bruce Wayne, our friend leaned across to the window and casually mentioned that he knew the police commissioner. The cop asked if he knew where the commission lived. "Where does he live? Are we going to go to his house to settle this?" was our friend's response. The cop let us go and told us to have a nice evening.

*Most surprisingly, there seem to be very few traffic accidents in Mexico. We have not seen anyone crash into each other, even though most intersections are uncontrolled, everyone drives very close and very fast. The danger we have seen is going off the side of shoulder-less roads while driving too fast, when the drop off is between 2 inches and 100 feet, the results somewhere between nominal and devastating.

Blogs We Spy On

Re:Whatever is:
a blog that started in 2002 as a group of friends that just wanted some writing exercise. Now it's just Steph. She's from Minnesota, but lives in Homer, Alaska when she's not finding a reason to travel. She makes money being a bushpilot and still uses this to keep up writing exercise and let people know where and how, etc.